2019-present
Benjamin Button is Taylor Swift's newest cat. He is a Ragdoll kitten. He is the brother of oldest sister Meredith Grey, and middle child Olivia Benson. He was first seen in Taylor's music video for "ME!", when Brendon Urie was seen handing the cat to Taylor as a gift. A few minutes before the video came out, Taylor mentioned in the youtube pre-release chat that she had a surprise she was keeping for months,

The secret turned out to be that she had gotten this new cat!

The Story of Benjamin Button

Taylor met Benjamin on the set of the music video, and immediately fell in love with him. The handler of the cat told Taylor that Benjamin was a "purr box," after Taylor mentioned that he was purring on her. Taylor then asked the handler, "Can I have him?" To which the handler responded with, "He is available." Taylor knew then that she needed to adopt him. Brendon was in awe over Benjamin as well. Throughout the shooting of the music video, Taylor kept mentioning how adorable she thought he was, saying that she would watch the music video and think about how that was the first time she saw him! 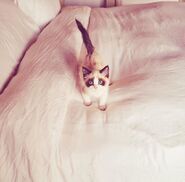 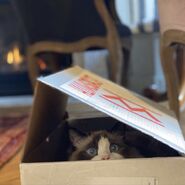 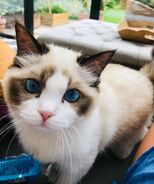