Born and raised in Dumfries, Scotland, Calvin became interested in electronic music in his teens and started recording demos in his bedroom starting in 1999.

Today, Harris has continued to release singles such as "One Kiss" with Dua Lipa, "Promises" with Sam Smith, and "Giant" with Rag'n'Bone Man.

Besides Rihanna, Calvin has collaborated with artists such as Ellie Goulding and John Newman among others.

In addition to his own music, Calvin has written and produced songs for artists such as Cheryl Cole, LMFAO, Dizzee Rascal, and Mary J. Blige among others.

Besides Taylor, Calvin had also dated singer Rita Ora and model Aarika Wolf. He has since been seen out and about with singer-songwriter Tinashe.

Calvin met Taylor at the 2015 BRIT Awards in London on February 25, 2015. They began dating on March 6, 2015. They were seen at a Whole Foods market in Nashville as well as a Kenny Chesney concert. They were later seen at a HAIM concert at the famous Troubadour nightclub in West Hollywood where they were seen being affectionate with each other during the show as well as holding hands as they exited afterwards. Taylor was also seen supporting Calvin when he performed at Wango Tango in Los Angeles where they were spotted leaving the event holding hands. They later attended the 2015 Billboard Music Awards together on May 17, 2015 where they sat together, and he even hugged or kissed her whenever she won an award. The couple even took a few pictures at the photo booth donning fun accessories with Taylor's friend, singer Ed Sheeran, her brother Austin Swift, and One Direction's Niall Horan and Louis Tomlinson at the after party hosted by Taylor and Sheeran. The two were later spotted with Sheeran grabbing lunch in New York.

She even posted a photo of the two of them on an inflatable swan on Instagram, captioning it "Swan goals". The two were also spotted stepping out of Taylor's Tribeca apartment in New York to grab some gluten-free pizza at L'Asso. More recently, the couple spent the 4th of July together at Taylor's Rhode Island home along with her other celebrity friends including Gigi Hadid, HAIM, Joe Jonas and his younger brother Nick, Martha Hunt, Serayah, and more. Taylor has hinted towards her new beau in a concert in Scotland, where she said to the crowd "I happen to love Scottish people" with Calvin watching in the audience. He has been to several of her shows since including her August 25, 2015 concert in Los Angeles where she was seen mouthing the words "I love you" to him in his seat, right at the end of the catwalk after her performance of her hit song Shake It Off. They recently spent New Year's Eve together where she watched him perform at Omnia nightclub in Las Vegas. They celebrated their one year anniversary with a cake, and Calvin even gave Taylor a locket with the date 3-6-2015 engraved on it. She even supported Calvin when he performed at the Coachella music festival in Indigo, California and was seen, along with her friends, singing along to his hit single "We Found Love", which featured a surprise appearance by Rihanna.

On June 1, 2016, People Magazine reported that the couple had split. Calvin confirmed the split via Twitter, saying in a tweet that "the only truth here is that a relationship came to an end & what remains is a huge amount of love and respect." Taylor later retweeted the tweet, but it was later deleted after photos of her with actor Tom Hiddleston made the press. They also deleted all pictures that had to do with each other from their social media.

Calvin and Taylor on a date in New York

at the 2015 Billboard Music Awards 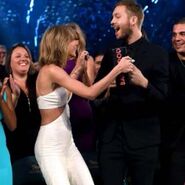 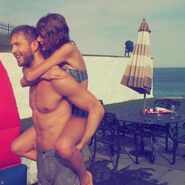 Calvin and Taylor at her home in Rhode Island