The Fearless Tour was the first concert tour by country music singer Taylor Swift. The tour was in support of her sophomore studio album, Fearless. On the tour, she was joined by guests Kellie Pickler and Gloriana. Teen singer, Justin Bieber joined her for the tour when she went to the UK. During the tour, Taylor performed with guests such as John Mayer, Faith Hill (05/22/10) and Katy Perry (04/15/10).

Prior to the launch of the tour, Swift played three shows in the US, including a sold-out performance in front of nearly 71,000 fans at the Houston Livestock Show and Rodeo in March 2009. Swift also played several dates in the UK and Australia, including two shows at the Shepherd's Bush Empire in London.[1]

Also, in the midst of her own tour, Swift began opening shows in select cities for Keith Urban on his Escape Together World Tour 2009.

The tour was announced on January 29, 2009, via her official website.[2] The initial press release announced that Swift would visit 54 cities in 39 states and provinces in the United States and Canada. Joining her on the tour would be a new country music group, Gloriana, as well as former American Idol contestant, Kellie Pickler.

The tour kicked off in Evansville, Indiana on April 23, 2009 at Roberts Stadium. In honor of the kickoff of the sold-out tour, Swift was presented the key to the city of Evansville and the City Council President declared Wednesday, April 23, 2009 Taylor Swift Day.[3]

The tour features a theatrical presentation of graphics, sets and visual elements all designed by Swift herself. The show runs more than 90 minutes and showcases Swift playing five different guitars as well as the piano. The show features multiple costume changes and a fairy-tale castle illuminated by more than a million lumens of light.[4]

In late June, a new tour date was announced for November 23 at the Wembley Arena in London. However it has become apparent that neither Kellie Pickler nor Gloriana will be joining her on the UK part of the tour. Taylor Swift announced another date in the UK at the Manchester Evening News Arena on November 24.[5] This was the final and second tour date in the UK. The shows at Wembley and Manchester will be the only two concerts for the Fearless Tour in Europe. It was announced later that singer Justin Bieber would join Swift on the two UK dates[6] While performing at Wembley Arena, Bieber broke his foot while he performed the opening lines of "One Time", but still finished the song. Despite his injury, Bieber confirmed that he would still perform in Manchester with Swift the following day, although the Wembley concert was cut short as he could not perform the encore. Bieber then went on to perform at the Manchester performance with an encore, he sang 'With You' a cover of the original version from Chris Brown.Following a 10 minute applause after she had sung Tim Mcgraw, Swift told the Manchester audience 'Everytime I hear the word Manchester, I won't be able to stop smiling...I love you!'. .[7] According to a German magazine, Swift was supposed to play three shows in Germany. However, tickets for those concerts never went on sale.

On September 30, it was announced that Swift would return to Australia in February 2010 to play another series of concerts, but now in arenas.[8] On October 8, it was announced that the tour would be extended through June 2, 2010 to include 37 additional shows in North America.[9] It has been confirmed that Justin Bieber will be performing at the Gillette Stadium on June 5, 2010 with Swift.[10]

In a recent interview with US teen magazine Twist, Taylor stated that she was writing songs for her next album while touring, saying that she was 'addicted to recording'. While touring, she released the single 'American Girl', which was recorded on Verizon's Mobile Recording Studio Bus. It is a cover of the original song by Tom Petty. It is now available via Rhapsody, iTunes Music Store or the Verizon Wireless Download Store. 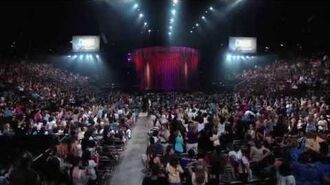 Tickets for the first shows for the Fearless Tour went on sale in early February 2009 and sold-out almost instantly. On February 6, 2009, tickets went on sale for the May 22 date at Los Angeles Staples Center and sold out in two minutes.[12] Tickets for several dates and venues, including Madison Square Garden, went on sale the following week and sold out in a record of one minute.[13][14] Taylor Swift did something that only a few music stars have done in Fresno that was selling out the Save Mart Center in "10 minutes or less" says Steve Tadlock.[15]

You Belong with Me 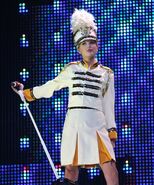