2015 – present
Joseph Matthew Alwyn ​(born February 21, 1991) is a British actor and songwriter who has been in a relationship with Taylor Swift since September 2016.

Born in North London, Joe secretly wanted to be an actor despite his introverted personality. He joined the National Youth Theatre in his late teens and studied English literature and drama at the University of Bristol, from which he graduated in 2012. He earned a BA in acting from the Royal Central School of Speech and Drama shortly after he had graduated from college.

He got his first role in the 2016 film Billy Lynn's Long Halftime Walk​. He has also appeared in films such as Mary, Queen of Scots ​and ​The Favourite​, both released in 2018. He appeared next in the 2019 film Harriet.

On May 2, 2016, Taylor and Joe both attended the Met Gala. They likely met here, as Taylor wrote in her song Dress: "Flashback when you met me / Your buzzcut and my hair bleached". At the 2016 Met Gala, Taylor had bleached hair and Joe had a buzzcut. In Gorgeous, Taylor sings "I've got a boyfriend, he's older than us / He's in the club doing, I don't know what". This likely refers to Calvin Harris, who she was dating at the time.

Taylor and Joe started dating on September 28th, 2016. In 2018 Taylor cover the song "September" by Earth, Wind & Fire; she changed the lyrics "September 21" to "September 28". It was later revealed that Taylor's friend, actress Emma Stone, had played matchmaker for the two.

On October 12, 2016, Taylor and Joe both attended a private Kings of Leon concert and went to the after party at the Bowery Hotel in New York afterwards.

On November 12, 2016, Taylor attended the premiere of Joe's movie "Billy Lynn’s Long Halftime Walk" with her mother and friends.

Early 2017, Taylor wrote about their relationship in a journal: "I'm essentially based in London, hiding out trying to protect us from the nasty world that just wants to ruin things. We have been together and no one has found out for 3 months now. I want it to stay that way because I don't want anything about this to change." The journal was released in 2019.

She also divulged that they had been successful in keeping their relationship a secret and continued, "We have been together and no one has found out for 3 months now. I want it to stay that way because I don't want anything about this to change."

Taylor and Joe attempted to hide their relationship from the media as Taylor wanted to be more protective of her personal life. She'd wear disguises when visiting Joe in London. Reports of Joe's relationship with Taylor first surfaced in on May 16, 2017, almost eight months after they started dating.

On June 5, 2017, Taylor and Joe were captured by the paparazzi on a balcony in Nashville for the first time together. On July 26th, the were photographed again when leaving Taylor's New York appartment.

In September 2017, Taylor released the song ...Ready For It, which is presumably about Joe. In the song, she sings “Some boys are tryin’ too hard, he don’t try at all though / Younger than my exes, but he act like such a man, so”. Joe is younger than her previous two boyfriends, Calvin and Tom. The lyrics "No one has to know" could refer to Taylor and Joe keeping their relationship private. On Tumblr, Taylor liked a post of a fan explaining how the lyrics refers to Joe. The music video also has references to Joe: The number 91 appeared, which could refer to Joe's birthyear 1991. Taylor also typed the number 21 on a keypad, which could refer to Joe's birthday, February 21.

On October 20, 2017, Taylor dropped her single Gorgeous. A fan who attended one of Reputation's secret sessions said the following about the song: “Basically Taylor made us all promise that if anyone made any accusations of who this song is about, we tell them it is 100 percent about her angel boyfriend of one year. This isn’t a secret. She wanted us to tell people.” In the song, Taylor sings "You should take it as a compliment / That I got drunk and made fun of the way you talk". Joe is British and has a British accent, which is probably what Taylor was making fun of. She also sings "Ocean-blue eyes lookin' in mine": Joe has blue eyes.

On November 10, 2017, Taylor released her album Reputation, which included a lot of references to Joe. Other than the ones already mentioned, these lyrics from the album seem to refer Joe:

From Dancing With Our Hands Tied:

From Call It What You Want:

On December 10, Joe and Taylor were seen at the Jingle Ball slow dancing and kissing during Ed Sheeran’s performance.

On April 6, 2018, it's reported that Taylor bought a house in London to set down roots near Joe and his family.

On May 9, 2018, Taylor kicked off her Reputation tour in Arizona and Joe was seen in the crowd. During the song Gorgeous, Taylor pointed at him.

On July 4, 2018, they are spotted vacationing in Turks & Caicos over the July 4th weekend.

In September, Taylor and Joe attended the New York Film Festival at Lincoln Center together for the screening of Joe's movie The Favourite and were photographed by paparazzi. Later, Taylor promoted the movie on social media.

Joe was asked about Taylor by Vogue, to which he said: “I’m aware people want to know about that side of things. I think we have been successfully very private and that has now sunk in for people, but I really prefer to talk about work.” In another interview, he was asked if it bothers him that Taylor writes songs about him, but Joe said "No, not at all. It's flattering." In most of the interviews he did, Joe commented that he didn't want to talk about his relationship with Taylor. Taylor explained in an interview why she doesn't talk about their relationship: I’ve learned that if I do, people think it’s up for discussion, and our relationship isn’t up for discussion,”

On December 11, 2018, Taylor attended the premiere of Joe's movie "Mary Queen of Scots". According to The Sun: "Taylor didn't want to draw attention to herself because it was really Joe's night, but she did want to support him and knew he would appreciate her being there, so she took steps to try and prevent anyone knowing she was there."

On January 6, 2019, Taylor and Joe both attended the Golden Globes and on February 10, they attended the BAFTAs, where Joe's movie was nominated in several categories. On February 24, They attended several Oscar parties and went to a Vanity Fair party.

On August 23, 2019 Taylor released her album Lover. It included the following references to Joe: From Cruel Summer:

From I Think He Knows:

On January 5, 2020, Taylor and Joe publicly attended the Golden Globes together. They also attended the after party.

On January 31, Taylor's documentary was released and included footage of Taylor hugging Joe after performing and home-videos Joe made of Taylor. Taylor said that she had fallen in love with someone who had a "wonderful, normal, balanced kind of life” and they wanted their relationship to be private. She also said that besides 2016 being a bad year, they were happy.

Taylor and Joe attended the 2020 NME Awards, and were seen kissing and hugging.

Joe co-wrote two songs on Taylor's album Folklore under the pseudonym William Bowery: Exile and Betty. This was confirmed in Folklore: The Long Pond Studio Sessions. Taylor said the following about exile: “Joe plays piano beautifully. He's always just playing and making things up and kind of creating things. Joe had written that entire piano part. He was singing the Bon Iver part, the ‘I can see you standing honey, with his arms around your body, laughing but the joke's not funny at all.’ He was just singing it. And I was entranced and asked if we could keep writing that one.”. About betty, Taylor said: “I just heard Joe singing the entire, fully formed chorus of betty from another room. So this was the first time we had a conversation where I came in and I was like, 'Hey, this could be really weird, and we could hate this, so because we're in quarantine and there’s nothing else going on, could we just try to see what it's like if we write this song together?” Taylor also confirmed that the song Peace is about her relationship with Joe.

In an interview with Paul McCarthy for Rolling Stone, Taylor said the following about their relationship: "In knowing him and being in the relationship I am in now, I have definitely made decisions that have made my life feel more like a real life and less like just a storyline to be commented on in tabloids." 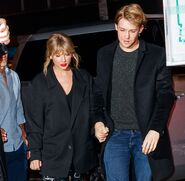 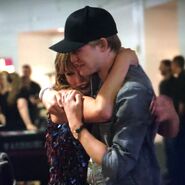 Taylor Swift and Joe Alwyn spotted holding hand in Paris, France on May 2019.

Taylor Swift spending the Fourth of July in 2018 on a romantic getaway with her boyfriend, Joe Alwyn.
Español
Community content is available under CC-BY-SA unless otherwise noted.
Advertisement